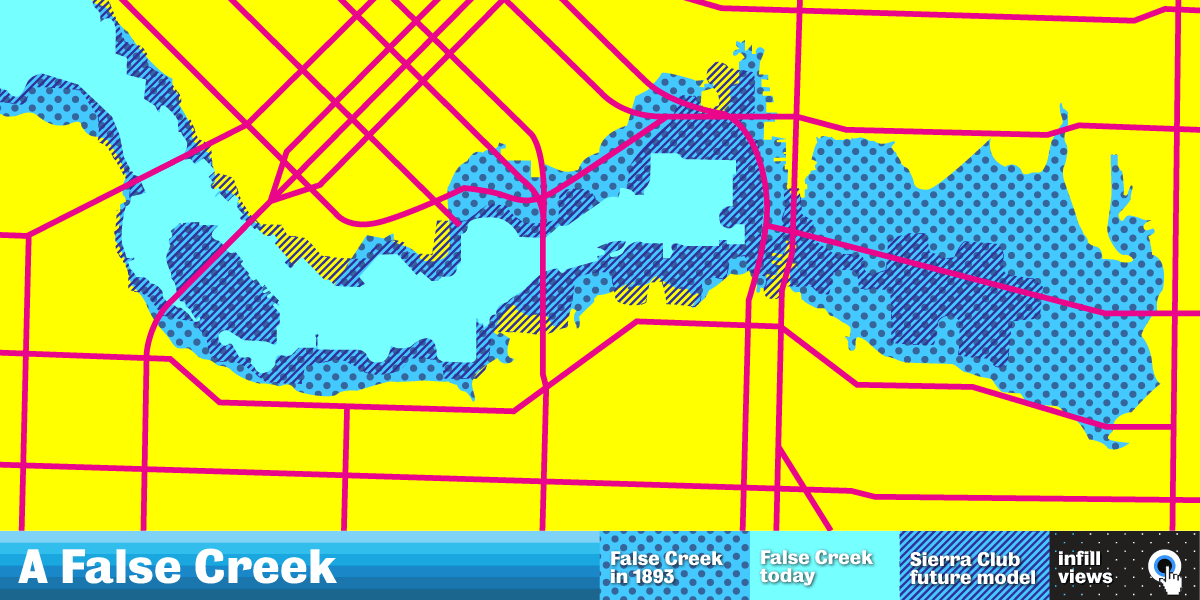 The Intergovernmental Panel on Climate Change projects sea levels rising between four and six metres as a result of the partial melting of the earth’s major ice sheets. In 2006, the BC Chapter of the Sierra Club of Canada created a a plug-in for Google Earth, simulating the effect of a six metre sea level rise on Vancouver. False Creek, which once extended as far as Clark Drive before massive infill projects altered its shape, is a site that provides an opportunity to reflect on the past, present and future of Vancouver’s highly managed shoreline.

A False Creek marks the midpoint of these sea rise estimates (five metres), with painted chromatic blue stripes on the pilings of the Cambie Bridge, and on the lampposts near Cooper’s Park. This abstract pattern of stripes inevitably produces a decorative effect, one with an ambiguous relation to the pattern’s function as a marker and visualization tool. The work points to the potential and problems of such tools. The scale of the engineering of False Creek and the Cambie bridge, along with the scale of potential future environmental change are made visually and physically palpable, yet the experience takes on an aesthetic related to philosophical concepts of the sublime.

The work of Rhonda Weppler and Trevor Mahovsky has long been concerned with colour coding and the graphic logic of signage. They are interested in the way something that is seemingly direct can unfold into something that is complex and contradictory. They have also developed various series of sculptures, constructed of ephemeral materials such as newspaper and aluminum foil, which dramatize the artwork's physical transformation over time.

The artists wish to thank Dillon Brayton and his company Pure Painters.

You may also be interested in the False Creek Watershed Society.